Home/blog/What’s the Difference Between the Ford Bronco and Ford Bronco Sport?
Previous Next

The Ford Bronco is a classic SUV that was previously a part of Ford’s vehicle lineup between the 1966 and 1996 model years. Although the Bronco was popular on the auto market and went through five generations during its time on the market, Ford opted to discontinue production of the Ford Bronco after the 1996 model year. 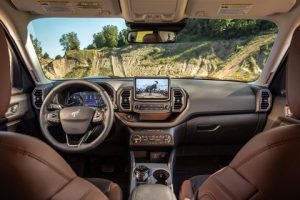 The Ford Bronco has a traditional SUV body design. It features a body-on-frame design that is—like most SUVs—based on that of a classic pickup truck.

The Ford Bronco Sport, on the other hand, has a one-piece unibody design that is more similar to the body design of a sedan than that of a truck or classic SUV.

The Ford Bronco and the Ford Bronco Sport are available with completely different engine options, which helps emphasize just how different the two Bronco models actually are in terms of drive performance.

When all is said and done, the Ford Bronco and the Ford Bronco Sport are both excellent vehicle options. Based on early critic reviews, these two SUVs are unlikely to disappoint once they finally hit the market.

If you’re in the market for one of the two Ford Bronco models in Morris, just make sure to consider the differences between them and how their features accommodate your driving needs before you make your final choice. Contact us for more info!