Is Ford Hinting at an Electric Ranger?

Home/Ford/Is Ford Hinting at an Electric Ranger?
Previous Next

Is Ford Hinting at an Electric Ranger?

[updated. originally published Feb. 2021]Ford is a classic American automaker that has been designing and producing cars throughout the United States and more recently around the world for more than a century—since this automaker’s founding in June of 1903, to be exact. Ford revolutionized the mainstream auto market and the auto industry as a whole with founder Henry Ford’s assembly-line method of 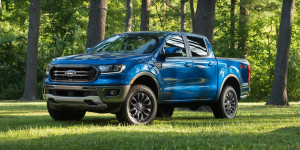 Should we expect an Electric Ranger soon?

producing vehicle parts and has remained one of the most reputable and successful major automakers in the world for more than one hundred years.

The first real all-electric vehicle that Ford released on the mainstream auto market is the 2021 Ford Mustang Mach-E. This all-electric crossover SUV is an all-electric version of one of Ford’s historically most popular vehicles and one of the most iconic classic pony cars of all time.

Just like the Ford F-150, the Ford Ranger mid-size pickup truck is scheduled to be redesigned for the 2022 model year. Many drivers as well as critics and experts in the auto industry are curious as to whether the redesigned, next-generation 2022 Ford Ranger will be available as an electrified model. Keep reading to explore Ford’s plans for the future of their electric vehicle lineup and find out more about the possible electrified future of the Ford Ranger.

Ford’s Plans for The Future of Their Electric Vehicles

Ford has big plans for the future of their electric vehicle lineup. This major automaker has announced that they plan for their entire lineup of vehicles to be capable of zero-emissions by 2025.

As a part of their announcement, Ford specified that these plans apply only to the automaker’s vehicle lineup in Europe. The major U.S. automaker has not confirmed their plans for the future of their vehicles in terms of electrification on the United States market.

Many Ford fans as well as critics and experts in the auto industry believe that one of the next vehicles Ford will electrify is the popular Ford Ranger mid-size pickup truck. Ford has already proven that they are capable of designing a fully-electric pickup truck with their announcement of the all-electric F-150 that will debut on the mainstream auto market in the United States for the 2022 model year.

The powertrain of a plug-in hybrid Ranger would likely be a 2.3-L turbocharged four-cylinder gas engine paired with an electric motor and battery pack. This powertrain is expected to allow the Ranger to deliver an impressive 362 horsepower and 500 lb.-ft. of torque on the road.

Ford has not made any official announcements yet regarding an electrified Ford Ranger. Only time will tell whether or not this major automaker decides to make their Ranger zero-emissions-capable in the United States for the 2022 model year.