The New Bronco VS. Past Broncos?

Home/blog/The New Bronco VS. Past Broncos?
Previous Next

The New Bronco VS. Past Broncos?

Although it hasn’t been available on the mainstream auto market for quite some time, the Ford Bronco is a classic Ford vehicle. It first debuted on the auto market way back in 1966 with the release of the first-generation SUV. The first-generation Ford Bronco was a high-performing vehicle for its time and quickly became one of Ford’s top-selling models. The Ford Bronco proceeded to go through five generations between 1966 and 1996. In 1996, however, Ford opted to stop production of the beloved Ford Bronco entirely. Is there a comeback on the way for a new Ford Bronco? 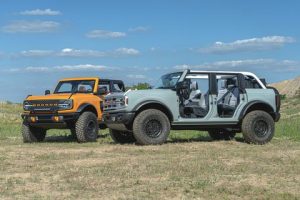 Like many other classic Ford vehicles, this  SUV is considered to be of legendary status in Ford’s lineup. Its return has been hoped for and long-awaited by classic Ford fans everywhere. Finally, the all-new sixth-generation Ford SUV will debut for the 2021 model year. Throughout the 30 model years that the first five generations of Ford Bronco models were available on the mainstream auto market, the Ford Bronco changed quite a bit in size. Interestingly, it went back and forth between smaller and larger frames—which leaves Ford fans curious about how the 2021 Ford Bronco will compare in terms of its body size.

So how does the new Ford Bronco measure up to its predecessors of Bronco generations past? Here’s everything you need to know about the sixth-generation Ford Bronco and how it compares to the first- through fifth-generation Bronco models.

The first-generation Bronco hit the mainstream auto market for the 1966 model year and the Bronco moved onto its second generation after 1977. This first-gen Bronco was—by today’s standard at least—a subcompact SUV. It measured 152.1 inches in length and just 68.8 inches in width.

This size is more comparable to the size of a modern hatchback vehicle than a modern SUV—even a compact or subcompact SUV.

The second-gen Ford Bronco was a full-size SUV model. Its bulky body design was actually based on that of the Ford F-series trucks that were currently on the market. The second-generation Ford Bronco measured 180.3 inches in length, which marked a big jump from the 152.1-inch length of the first-gen Bronco.

The fourth-generation Ford Bronco debuted for the 1987 model year with a length that was almost identical to that of the second-gen Bronco at 180.5 inches.

Large SUVs were very trendy throughout the 1990s, which may have contributed to the growth of the Bronco for its fourth and fifth generations.

The fifth-generation vehicle entered the auto market for the 1992 model year as the longest Bronco yet.

Its length measured 183.6 inches, which marked a significant jump from its fourth-gen 180.5-inch length.

After 25 years off the market, the sixth-generation will debut for the 2021 model year. This ultra-modern, stylish SUV will make its comeback with a length of 173.7 inches with a 100.4-inch wheelbase.

Those are the dimensions for the classic two-door Ford Bronco, but 2021 version will also be available in a four-door option. The four-door version of the new Ford Bronco will measure 189.4 inches in length, which makes it longer than any other Bronco that has ever been on the market.

Regardless of its size, the new Ford Bronco is definitely one of the most hyped-up new releases in the auto industry for 2020. Early critic reviews suggest that the Ford Bronco will be an exciting addition to the mainstream auto market when it becomes available for purchase sometime within the last quarter of 2020.

For more info make sure you contact us soon!