[updated from Feb ’21]On the night of February 14th, 2021, a deep freeze began to spread throughout Texas and many parts of the state experienced temperatures as low as 0 degrees Fahrenheit—which is more than 50 degrees below the average temperature in Texas at this time of the year. Freezing temperatures as low as 0 degrees Fahrenheit are very common in Arctic climates, but Texas is accustomed to warmer weather even during the winter.

The deep freeze that Texas experienced throughout the week following Valentine’s Day broke multiple records for the lowest temperatures recorded in the state for decades—or even for more than a century in some areas of the state. Texas is made up of 254 different counties, and all of these counties were issued winter storm warnings during the week of February 14th.

Unfortunately for millions of Texans throughout the Southern state, Texas’s power system is not designed to operate effectively when faced with Arctic temperatures. Large areas throughout Texas—including major cities such as Houston and Dallas—experienced extended power outages throughout the week following February 14th.

These power outages were caused primarily by the simple fact that Texas’s power grid is just not prepared to fulfill the high level of energy that was demanded by Texans in order to keep themselves warm during the state’s unprecedented deep freeze. Faced with devastating storms, heavy snowfall, and blistering cold, millions of Texans were also left without any power in their homes—or even anywhere in their city or county—throughout the week of February 14th.

Texas and the United States as a whole banded together to try to minimize the disastrous consequences of freezing temperatures paired with power outages throughout Texas. President Joe Biden declared an emergency in Texas in order to allow agencies throughout the United States to help provide disaster relief in Texas and Texas began initiating rotating power outages to relieve some of the demand on the state’s power grid.

Ford F-150 trucks as generators to power homes throughout Texas that were left without electricity due to statewide power outages during the week of February 14th.

The 2021 Ford F-150 is a unique, revolutionary work truck on the mainstream auto market. It is available with a special Pro Power Onboard generator, which is a power generator that runs off the power generated by the 2021 F-150’s engine. This generator does not rely on any external sources of electricity. 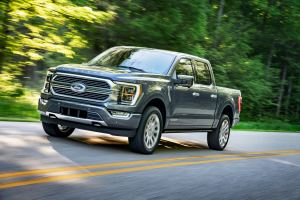 The amount of power that the 2021 F-150 can provide via its Pro Power Onboard generator depends on the F-150 model. Some F-150 models can offer up to 7.2-kW of power and can run for up to 32 hours on a single full tank of gas. Fortunately, the Pro Power Onboard generator is designed to be run while the F-150 is not in motion—which means it is designed to be automatically powered by the pickup truck’s engine in order to offer consistent power flow without killing the F-150’s battery.

Of course, Ford did not design their 2021 F-150 trucks with a built-in power generator in anticipation of using that generator to power homes during electrical outages. Instead, Ford’s vision was that F-150 drivers would be able to use the Pro Power Onboard generator in their pickup trucks to run power tools at work sites or to power mini-fridges and audio speaker systems while camping or at tailgate events.

With that being said, due to the state of emergency in Texas, many official Texas dealerships loaned out hundreds of Ford F-150 trucks equipped with Pro Power Onboard generators in counties where many homes were left without power. Many Texans who already owned their own Pro Power Onboard generator-equipped F-150 models also utilized their pickup trucks to generate power for their homes.

It is estimated that more than 400 F-150 trucks were distributed throughout Texas to be used as power generators during the state’s deep freeze. These 400-plus trucks loaned out by car dealerships in addition to the F-150 trucks used to generate power by Texas residents who already owned them doubtlessly saved many lives as Texans simply tried to survive through the state’s unprecedented deep freeze during the week following February 14th. Check out all the trucks we have available today.