Our Dealership Will Remain Open By Appointment Only. We Care About Your Health & Safety. Our Response To COVID-19. Click Here To Read.

Are We Seeing a Ford Mustang Mach 1 Reboot?

Home/blog/Are We Seeing a Ford Mustang Mach 1 Reboot?
Previous Next

Are We Seeing a Ford Mustang Mach 1 Reboot?

The Ford Mustang Mach 1 is a performance-oriented option package for Ford’s iconic Mustang model. The Mach 1 initially launched more than half a century ago back in 1969. At this time, the Ford Mustang was at the height of its trendiness and popularity and was just beginning to define itself as the classic, widely beloved all-American performance vehicle that it remains today.

The first generation of the Mach 1 model was introduced in 1969 and got a facelift in 1971. Mustang models equipped with this performance-oriented add-on package were only mass-produced and distributed on the mainstream auto market for a short period of time, though. The Mach 1 was available on the market between 1969 and 1978 and again for a brief time between 2003 and 2004. While it was available on the market—both times—the Mach 1 introduced exciting new features to the classic Mustang pony car. It equipped the Ford Mustang with various features that enhanced this sporty pony car’s appearance and performance with a variety of different engine options, upgraded suspensions, flashier exterior and interior detailing, etc.

Although the Ford Mach 1 has been off the market for more than 15 years now, many Ford drivers and classic car enthusiasts still hold out hope that there may be a reboot of this performance-oriented package for the Mustang in the near future—more specifically for the 2021 model year.

Ford has not yet confirmed that there will be a rebooted Mustang Mach 1 model for the 2021 model year. However, many Ford fans speculate that the Mustang Mach 1 will be making a comeback for 2021. Here are three reasons why die-hard Mustang fans are expecting an imminent return of Ford’s cult-favorite Mach 1 model.

Every car is assigned a VIN number when it is made available for sale on the mainstream auto market. This VIN number reveals key identifying information about a car, including the car’s model year, vehicle type, trim level, country of origin, etc.—as long as you know how to decode the number. That’s why VIN decoder guides exist: to

help drivers decode VIN numbers and figure out—among other things—which type of car is paired with a specific VIN number.

Other clues that point toward a possible reboot of the Ford Mustang Mach 1 are reports of public sightings of Mach 1 model prototypes driving through public streets in the U.S. Classic car enthusiasts have recognized new Mach 1 models on the roads multiple times in recent years.

Whether this was an oversight on Ford’s part or a purposeful marketing move to get people excited about a possible reboot of the Mach 1 package, it definitely got Mustang fans talking about the potential for a Mach 1 reboot in the near future.

Trends in the auto industry are major determining factors that decide which vehicles make the cut for widespread distribution on the mainstream auto market and which remain auto-show prototypes that never actually get to hit the road.

Auto trends are ever-changing, and they have most recently shifted toward quality and away from affordability. Drivers have begun to prioritize the quality of the vehicle they drive over its price tag and many are willing to pay slightly more for a better, higher-performing car with more special features. 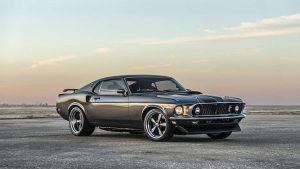 The Ford Mustang Mach 1 has never been an extremely out-of-budget car and could even be considered budget-friendly by many, but it definitely isn’t one of the most affordable models on the market.

Modern drivers also tend to be more interested in cars that have their own distinctive character that sets them apart from other vehicles on the road. Most affordable, cookie-cutter cars lack this defined, unique character that drivers want, but the Ford Mustang Mach 1 is certainly one of a kind both inside and out.

Only time will tell if Ford decides to reboot the Mustang Mach 1, but the possibility of this reboot and the excitement it has generated might be a sign for Ford Motor Co. that getting a Mustang Mach 1 reboot in the works—if they haven’t already—could be a profitable idea.