A Trip Down Memory Lane in a Ford Mustang

A Trip Down Memory Lane in a Ford Mustang

When you think of an American car, one of the first models to come to mind is likely the Ford Mustang. The Ford Mustang is an iconic American car that has been on the auto market for more than 50 years. The first of it’s kind hit the mainstream auto market in 1964 for the 1965 model year, and since then has been an integral part of Ford’s vehicle lineup.

While it maintains its classic style to this day, the popular muscle car has undergone many updates, upgrades, and redesigns since its initial debut way back in the 1960s. The Ford Mustang is more than just a car. It’s a part of American history. Like Ford itself, the Mustang is an American icon that has had a pervasive influence on popular culture in the United States. In fact, more than 65 years after its initial debut on the mainstream auto market, the Ford Mustang has become a symbol of American culture itself.

Taking a closer look at the many faces of the Ford Mustang throughout history is like taking a walk back through time and examining the ever-changing car trends that have each reigned over the auto industry at one point or another. Whether you’re a classic car fan or just a curious driver, keep reading to learn more details about 5 of the most iconic Ford Mustang models throughout history.

The very first Ford Mustang debuted at the World’s Fair in 1964 and was released for the 1965 model year. The Mustang was designed to be a fun, sporty car that appealed to younger drivers as a cool, hip, and trendy vehicle to drive.

It comes as a surprise to many people that the car actually came from very humble beginnings. Ford’s initial budget for the design and production of the Mustang was incredibly low, but many Ford team members felt passionate about this sporty new car and spurred the Mustang through the design and production process until it got a chance to prove itself on the mainstream auto market. By March of 1966, the Mustang was a best-seller and Ford had mass-produced one million of these classic sedans— which was an unheard of quantity at that time.

The 1965 Mustang was available with convertible and notchback body styles and was equipped with one of three different engine options—a 2.8-L straight-six engine, a 4.3-L V8 engine, and a 4.7-L V8 engine.

Throughout the late 1960s, the vehicle gained significant bulk. Each update and upgrade to the Mustang through these years added length, width, or weight to this classic sporty sedan. 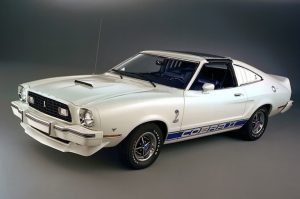 In 1974, however, the smaller Mustang II was introduced. This subcompact sedan was available with notchback and hatchback body styles and was equipped with either a 2.3-L four-cylinder engine or a 2.8-L V6 engine. 1974 proved to be the number-one best-selling year for the exciting new Mustang II model. It was also the year in which the Mustang II won the Car of the Year Award from the iconic MotorTrends auto magazine.

In 1987, Ford was focused on aero-themed styling. As such, the 1987 Ford Mustang underwent an aero-themed restyling that included flush headlights and a redesigned interior.

By the early 1990s, the brand had already defined itself as a timeless classic car that wasn’t going anywhere anytime soon. Throughout the 1990s and early 2000s, the Ford Mustang began to return to its roots.

For the 2005 model year, it underwent a retro redesign that was complete with a re-introduction of this sporty sedan’s classic squared-off body shape. The 2005 Mustang was equipped with one of two engine options—a base 4.0-L V6 that delivered 210 horsepower and a 4.6-L V8 that delivered 300 horsepower.

The 2015 version debuted with refreshed styling and independent rear suspension as a long-awaited standard feature. It also hit the market with a brand-new engine option—a 2.3-L turbocharged four-cylinder engine that delivered 310 horsepower.

The fact that the Mustang is still an integral part of Ford’s vehicle lineup after so many decades and trend changes is a testament to the timeless strength and solidity of this classic sporty sedan’s design and performance on the road. If you’re in the market for a new car and are a fan of classics, consider this one as your next vehicle.